Brunch has always been one of my favorite meals – even though I don’t get to enjoy it as often as I’d like to. There’s just something about being able to wake up late and still be able to eat delicious breakfast foods that’s makes brunch appealing. I’ve been staring at Norma’s menu for as long as the Boyfriend and I have been dating and finally we got the chance to go. Located inside the Le Parker Meridien Hotel on the West side, Norma’s is one of the most sought after brunch spots in the city. It is also a bit on the pricey side for a normal college student but when the Boyfriend said he’d treat me to brunch there, I practically jumped at the chance.

We arrived around 10am on a Tuesday, which is right smack in the middle of their all day brunch service (from 7am to 3pm daily). The wait time for a table for two was only about 15 minutes, which isn’t bad at all considering how the Boyfriend once waited 30 minutes for a table for five. Norma’s has a huge menu of dishes – ranging from pancakes and waffles to crepes and egg dishes. But first, once you’re seated, you receive a complimentary shot of their smoothie of the day. Our smoothie of the day was strawberry-banana, which was nice. We decided to go with a French Press of tea for each of us, which was definitely more tea than one could ever finish in one sitting ($7.00). 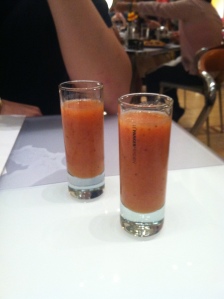 After look around me and seeing the enormous portion sizes of the waffles, French toast and pancakes, I decided to go with a savory dish instead. There was no way I would be able to finish any of the sweet dishes. The Upstream Eggs Benedict, which featured smoked salmon with eggs benedict and fingerling potatoes, caught my eye ($23.00). Their Eggs Benedict dishes are served with a pancake bottom instead of English muffins, which was something I’ve never had before. It was definitely something new and refreshing. The usage of pancakes meant that I didn’t have to saw into the tougher dough of an English muffin. Now onto the eggs – it was poached to perfection. The outside had shape and once I burst the yoke, it oozed out onto my pancakes and salmon. The salmon was very fresh and there was more than enough to accompany my eggs.

The Boyfriend decided to go with their Flat-As-A-Pancake-Crab cakes ($24.00). Each order comes with two large crab cakes and a side salad tossed in a dill, yogurt and mustard sauce. The dipping sauce for the crab cakes comes inside a tempura fried onion, which we gobbled up. First, I must comment on the side salad – the dressing was delicious! I really love mustard based dressings because it has that hint of spice in each bite. The crab cakes were fresh and packed to the brim with crabmeat. They were perhaps the best crab cakes that I’ve ever had. 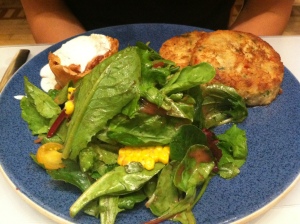 By the time we finished both our entrees, we were stuffed. I have no idea how the tables around us ordered bread service to go along with their entrees. We barely even finished our main dishes!

If you look on Yelp, Norma’s a bit of a hit or miss – most people aren’t comfortable with the prices. But here’s the reason why both the Boyfriend and I are okay with the prices at Norma’s – the quality of the food and the portion sizes definitely make up for the prices. Sure, $20+ is a lot to pay for just a brunch entrée – considering how Tartine offers tea, orange juice and an entrée for just $15. But the quality of the food and the portion size can’t be beat. You leave full and knowing you just ate something very delicious.

The service could’ve been better – we barely saw our waiter except when we ordered and when he brought us our meals. But it’s definitely not a deal breaker because I’ve had a lot worse. I will definitely return to Norma’s – but probably not for a while since the Boyfriend’s wallet has to recover first!