Lombardi’s Pizza started off in 1897 as a grocery store but began rolling pizzas in 1905. They have since been crowned the title of America’s First Pizzeria, celebrating more than 100 years in serving pizza. Lombardi’s utilizes a coal oven to bake their pizzas, effectively creating a “New York” pizza. Everyday, Lombardi’s attracts dozens of tourists and locals to their restaurant. Being a native New Yorker, I felt that I had an obligation to try their pizza since it is considered one of the most famous pizzerias in New York City. So the boyfriend and I grabbed a couple of friends and paid Lombardi’s a visit.

Upon entering the pizzeria, I noticed the red and white-checkered tablecloths that are unique to old-school pizzerias. Along the walls were pictures of the owners with various celebrities – including some pretty big names. While waiting to be seated, which was very quick since it was a Thursday afternoon on a rainy day, we used our eyes to explore the décor. Because we were a large party, we were led through the back, past the kitchen and up the stairs to the 2nd floor seating area. It was very quiet, which made conversation easy.

Lombardi’s menu consists of one double-sided page. One side has the pizza options while the other side has the appetizers and drinks. Deciding what size pizza and what toppings proved to be harder than we thought. So we started off with drinks first. I ordered an Italian Soda, which I have never had before. Italian sodas are made with carbonated water, simple syrup and whipped cream on top. I ordered the vanilla syrup, but they have a raspberry option as well. The vanilla syrup made the carbonated water taste like a vanilla ice cream float. I felt like I was drinking an ice cream float without the ice cream!

We ordered their Bruschetta on Rustic Bread as our starter. Their bruschetta is made with chopped vine ripe tomatoes mixed with onion, basil, salt and pepper on seasoned rustic bread. The bruschetta is different then most bruschetta’s. Lombardi’s makes their bruschetta with large chunks of rustic bread instead smaller breads or baguettes. I really loved their bruschetta – especially the bread. It was crunchy, yet soft enough to bite into without much resistance. The bread was also well seasoned, making me want to munch on just the bread alone!

Now we move onto the star of the show – their pizza. Their pizza begins as a simple margarita pizza that is created with fresh mozzarella, their own San Marzano tomato sauce, pecorino romano and fresh basil. You can add any topping you want on it for $3 each or for $2 you can get a topping on half of the pizza. The small pizzas, at 14 inches, offers 6 slices while the large pizzas, at 18 inches, offers 8 slices. We ordered a small margarita pizza with homemade meatballs (beef with pork) on half of the pizza. We left the other half plain, just to try the flavor without any added toppings. 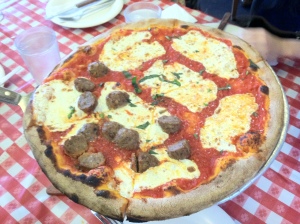 There is much to say about this pizza. First, let’s talk about the sauce. It did not taste like the typical tomato sauce that comes on top of pizzas. Lombardi’s San Marzano tomato sauce is much sweeter. I could barely taste the sauce, which means the dough is not overpowered by the flavor of tomatoes. The sauce is also not as thick as many other pizza parlors. Lombardi’s sauce was light and tasty.

Next, let’s talk about the dough. It had the characteristics of a good New York slice- thinness. The dough was extremely thin – a lot thinner than I have ever tasted before. But what I appreciated about their dough was the fact that no matter how many toppings you put on it, it did not bend or break apart like pizzas from a lot of other pizzerias. The dough was so incredibly thin but it still supported all the toppings. The crust and bottom of the pizza was black and crispy with bitter undertones when you bit into it. You can tell from just looking at the pizza that it was baked in a coal oven. The black, smoky-crust is evidence of the amount of coal and heat that is put into baking the pizza. 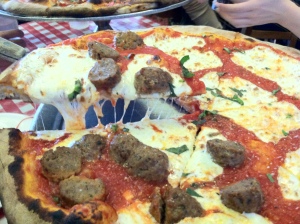 Lastly, it’s time to talk about the toppings. The mozzarella cheese was very fresh. I could tell that the mozzarella was very fresh because of the stringiness of the cheese when I bit into the pizza. The cheese would follow me in the form of long strands. But the best part of the pizza was the homemade meatball topping. The meatballs were chewy and juicy. I expected them to be a bit burnt and dry from being in the coal oven but they weren’t at all! The meatballs were definitely my favorite of the day.

I would definitely recommend paying a visit to Lombardi’s to try their coal oven pizza. Nowadays, it is illegal to build new coal ovens, which makes Lombardi’s one of the few coal oven pizzerias still in existence. Although their pizzas aren’t exactly cheap, I think that having a pizza at Lombardi’s is something that every New Yorker needs to do at some point in their lives. I know I won’t be visiting Lombardi’s every time I get a pizza craving (they sell their pizzas by the pie and not by slice), but I know if I ever wanted extremely thin-crusted pizza, this is where I’d go.