It’s time for tea! Since it’s Spring Break, a couple of friends and I decided to have girl’s day at Alice’s Tea Cup Chapter II. This chapter has two floors with the top being airier and lighter. Before we walked in, we all looked at the chalkboard with their daily scone options. They bake different scones everyday so you never know what you’re going to get!

We arrived around 12pm on a weekday so we only had to wait around 5 minutes for a table for 5 on the second floor. Once seated, our waitress quickly supplied us with their extensive tea list and their food menu. It took so long to figure out what tea we wanted to get! The cutest thing though was the mismatched teacups on the table. Everyone at our table had a different teacup!

My sister and I decided to share The Mad Hatter afternoon tea set for two ($45). It comes with two pots of tea, your choice of three scones, your choice of two sandwiches, assorted cookies and your choice of dessert. The tea sets come in a three-tier stand, which was so cute!

The first tier was the scones. We decided to go with the pumpkin, blueberry-coconut, and double chocolate chip. The scones came with a side of preserves and clotted cream, which is my favorite accompaniment with scones. I really must rave about Alice’s Tea Cup’s scones. They are big, filling, and very soft.

First up is their most famous scone – the pumpkin. This scone was differently shaped from the rest because it was more round than triangular. The scone had a pumpkin glaze, which was very sweet. The scone had such a nice pumpkin flavor! The sweet glaze made the scone so sweet that I didn’t even need any preserves or cream to go with it. Mmmmm! 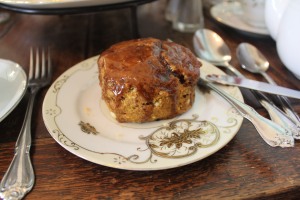 Next up is the blueberry coconut, which was my favorite of the scones that we ordered. I broke off a chunk to nibble on before my sister could snap a picture but the usual shape is triangular. There were coconut shreds and blueberries all over the scone. There was also a light sugar dusting on top, which I really liked. Paired with preserves and clotted cream, this scone was divine!

And finally, we have the double chocolate chip scone. All scones were served warm so this one was delicious. The chocolate chips were dispersed very liberally and were semi-melted. I didn’t wind up finishing any of the scones because we wanted to get to the sandwiches. They were very nice and gave us boxes to wrap up our scones to go.

Tier two of the stand held the sandwiches. We decided to go with their black forest ham and smoked salmon sandwiches. There were three pieces of each sandwich, so we were able to try them both and then some. The smoked salmon sandwich was open-faced and was served with lemon-dill butter over pumpernickel bread. The salmon serving was very generous. I never felt like there was more bread than salmon. Very good! 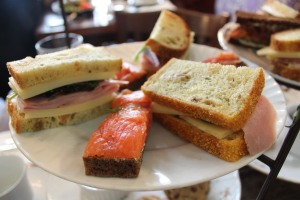 The black forest ham was served with gruyere, mayo, and whole grain mustard on a golden raisin semolina bread. There was an abundance of cheese in this sandwich, which I loved! The crust of the bread was a bit hard to bite into but overall the sandwich was very delicious. I would’ve liked a softer bread but the raisins really brought a sweetness to the otherwise salty sandwich. 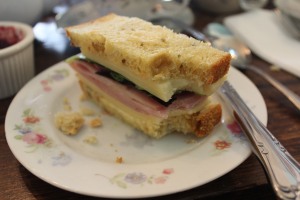 The third tier of the stand was the assorted cookies and chocolate mousse. We had to pack the cookies to go because we were so full after the first two tiers! But we had some room left for the chocolate mousse. 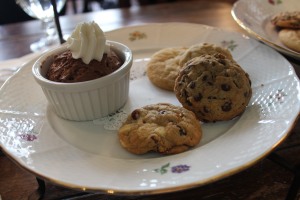 The chocolate mousse was very soft! We jokingly called it “the chocolate mousse of death” because it was so heavenly! There was rich chocolate flavor mixed with fluffy mousse. I’m very glad that they gave us a tiny ramekin of it because any more and we wouldn’t have been able to finish!

Now, unto the teas! Each of us got a pot of tea so I decided to go with a green tea, since I wanted something healthy. I went with their Gyokuro Green Tea, which is a tea that is picked only once a year in Japan. This tea was a more bitter than most of the green teas I’m used to but I thought it brought a nice contrast to the sweet and savory tea set. There was so much tea in the teapot that I wasn’t even able to finish by the time we finished our meal!

The sister got their Peach and Flower Tea, which was nice and refreshing. My favorite of the day had to be our friends’ Hawaiian Paradise tea, which is without caffeine. Made with apples, oranges, berries, rosehips, hibiscus and apricot fruit, it had a great tropical taste. I would definitely get this tea the next time I’m here! 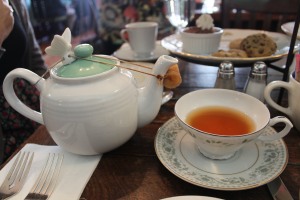 Our waitress was amazing. She was friendly and answered any questions that we had. Three of my friends were sharing a Mad Hatter for two and she was completely okay with it. At the end of our meal, she even helped us to take a group picture!

We sat in the main room but behind our area was a tinier room filled with tables-for-two. The décor there was so pretty! I will definitely be back to sit in that area!

* Photo creds to my sister!