Since the entire day was pretty much around 30 degrees, the Boyfriend and I decided to head to Cocoron for some hot soba. We’re used to eating our soba in a cold broth so this was a new experience for the both of us. Cocoron’s lunch hours run from 12:00pm to 3:00pm at both their locations. We arrived around 1:30 at their Soho location and were seated immediately. The restaurant was about 1/3 full but filled up as we started our appetizers.

I decided to go with some hot tea since it was so cold outside. They have two hot teas on the menu – soba tea and Gyokuro Premium Green Tea (both at $1.50). I went with the green tea, which was delicious! The matcha powder comes in a little basket, which is dipped into the cup whenever it is refilled with hot water. 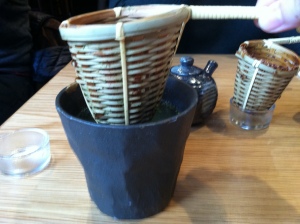 Ever since we had the cold tofu at Zenkichi, we have been craving the dish. After finding out that Cocoron serves their own Homemade Silky Tofu ($5.00), we knew we had to try it. Unlike Zenkichi, they don’t offer a broth to go with the tofu – just soy sauce for you to flavor the tofu with. The tofu was indeed very silky and soft but I still think Zenkichi’s cold tofu is smoother. 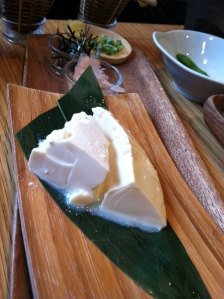 Their Soho location doesn’t offer their signature Stamina Dip Soba so I went with their Chicken Meatball Dip Soba ($12.80) instead. I ordered the regular portion, which was more than enough to fill me up. The soba comes to the table in a tray with the works on it. The waitress then lights the fire underneath the stone slab. The fire keeps the hot broth at a slow boil as you dip your soba into it. My broth has tiny chicken meatballs in it, which were very juicy. The soba was cooked al dente and the fact that they aren’t sitting in the broth waiting for me to eat it kept it that way for the entire meal. This way of eating soba is a bit of a hassle but the perfect noodles in each bite more than made up for it. 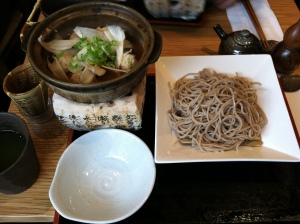 After we finished our soba, our waitress brought over a big box of hot water and a laminated information card. The card explained that by adding water to our left over broth and drinking it, we would be getting a lot of nutrients that had left the soba during the cooking process. It was nice that we could finish the delicious broth! 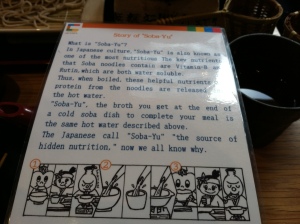 Everyone on Yelp raves about Cocoron’s desserts so we decided to go with two of them. First was their Coconut Milk ($5.50) with frozen bananas, strawberries, blueberries and mango. The bottom of the bowl is layered with tapiocas, which made the overall dessert very sweet and smooth. The frozen fruits were very cold at first but after a few bites, I couldn’t get enough of the frozen bananas! This dessert is definitely big enough to share. 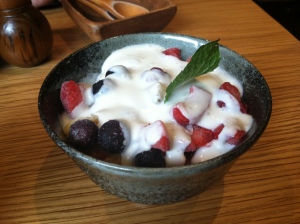 Our second dessert was their Annin Tofu, ($4.00) or their version of a panna cotta. The serving size is a bit small for the price but it was pretty delicious. The tofu was smooth and sweet, which went down quite easily. 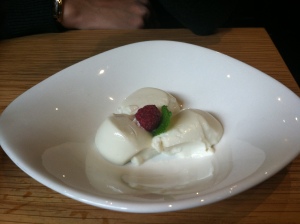 Overall I was very impressed with Cocoron. The bill was a bit pricey for a regular lunch, but part of the reason was because we wanted to try everything. I know I would be back but next time I would probably just order a soba.