The Boyfriend and I have been going to Smorgasburg for a few years now – we often make our annual trek to Williamsburg in June. This year, we opted to go early in May to try to beat the heat – and the crowd! We arrived around 12pm and the fair was still relatively empty. All the stands were already open so we strolled around and stopped when we found something that caught our eye.

The first stand that caught our attention was Rise & Swine, which serves breakfast bacon sandwiches. Rise & Swine cures, smokes and cooks bacon made exclusively from Heritage breed Pigs. We picked their Bacon, Egg and Cheese ($8.00) sandwich served on an English muffin. The sandwich comes with a fried egg, caramelized onions, cheddar cheese and jerk bacon. The bacon was really tasty (when is bacon not tasty??) and the onions and cheese really added a lot of flavor. But beware! The fried egg has a very gooey yoke that bursts the moment you bite into the sandwich!

Our second stop was Big Mozz, which serves up freshly made mozzarella that’s craft on site! You can even stand by and watch as they stretch and roll the mozzarella balls! We opted for the Mozzarella Bomb ($7.00), a ball of mozzarella cheese injected with pesto and served over greens. This was one of my favorites of the day – the pesto was very flavorful and tasted amazing when mixed with the super fresh mozzarella and greens. I highly recommend a stop at Big Mozz!

Our third stop was at an old favorite, the Lumpia Shack. We had their signature pork lumpias, which were crunchy and crispy. They’re a more refined version of the traditional Filipino lumpia, which is crunchier and probably 10x oilier! We’re not partial to either – a good lumpia is a good lumpia!

Our fourth stop was Carnal – we had not planned to stop but the smell got to us. We walked a few feet within the stand and could already smell the delicious grill! Today, Carnal was serving up Beef Short Ribs ($13.00) topped with bone marrow, spring onion and black pepper. The price tag is a bit steep but the ribs are divine! They’re very moist and tender – basically falling off the bone with each bite. The bone marrow and spring onion topping is so flavorful and buttery. It’s a messy dish but it’s a damn good one.

Our fifth stop was Rai Rai Ken, who was serving just one dish that day – cold Unagi Mazemen ($9.00) with barbeque eel, cucumber, shredded omelet, onion and Sichuan pepper. They use a tiny blow torch to heat the barbeque eel on site so it’s really cool to watch. The mazemen is really refreshing on a hot day and super tasty. The ramen noodles were cooked to a perfect al dente and each bite had a nice bounce to it. There’s an option to add a scoop of guacamole for $2 – we weren’t adventurous enough for this but we heard good things from the others that ordered it.

Our last official stop was Home Frite, who was selling Belgian fries – Pomme Frites style. The line was longer than the Ramen Burger line and we were seeing numerous people walking around the lot with them so we had to try it. There’s only one size so it’s definitely something to share between 2-4 people. We opted for the Truffle Fries ($8.00) with the Truffleist Truffle Oil, parmesan cheese, and lemon garlic aioli for dipping. The fries were good and the dipping sauce was even better! The fries come out pretty quickly so the line does go by fast. 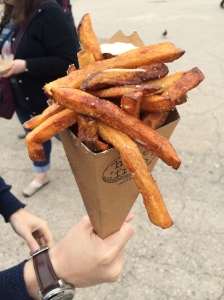 We didn’t really get dessert at the fair but we did have a lot of beverages. Standouts included the oldie-but-goodie Kelvin Natural Slush (Arnold Palmer base with cherry flavor is surprisingly good!), POG (passo-orange-guava juice) from East Coast Poke, and the iced teas from Bellocq Tea Atelier. Their teas are always super refreshing and very light on the palate! There were quite a few vendors that I would’ve loved to try out – if I had more stomach space. I think I’ll make a repeat trip this year – stay tuned!