When I first heard about Seamore’s, I knew I had to eat there! Fresh seafood is one of my favorite things in life so it really was a no-brainer for me. I bookmarked them the day they opened but it wasn’t until about two weeks later that I got to try them out. After a much needed spa day (facials and a manicure) in Chinatown, I offered to treat my mom to dinner at Seamore’s. We rolled in at 6:30 and were quoted an hour wait time. So we put our names down and went in search for a coffee shop still open at that time. No more than 25 minutes later, I got a text saying a table was ready.
We were seated in their huge and airy dining room – they had opened up all the windows to let the breeze in. Our waitress greeted us right away and explained the menu to us. Seamore’s sources locally so their fish comes from anywhere between New York and Maine. They have about three to four fish options every day. These options are never kept for longer than 24 hours at a time so they’re super fresh. Each day they have a little wood board that tells you the options for the day.

We opted to start off with the Poke ($13.00) with ponzu, peanut, and avocado. The fish of the day for the Poke was Tuna, which is pretty standard. If I’m in Hawaii, I actually prefer the Salmon Poke, but I like tuna as well since it’s the more traditional fish. The poke was fresh and tasty – it’s definitely not the standard shoyu poke from Hawaii but it’s a very good interpretation.

We decided to split two different dishes as entrées so we could try something new. First we had the Seared Seasonal Fish Tacos ($15.00), which comes with two huge corn tortillas topped with black bean sauce, lettuce, pico, avocado, and crema. The fish of the day for the Seared Tacos was a yellowtail flounder, which was amazing. The flounder was so tender and soft – it practically melted in our mouths. The combination of fish juice, pico and crema made the dish a bit sloppy to eat but I highly recommend it – the flavor is amazing.

We also split the Reel Deal ($21.00), which is their signature entrée. You choose a fish of the day and a sauce. The dish comes served in a bowl with three of their daily sides. On the day we visited, we had warm quinoa salad, roasted summer squash and collard greens. We opted to go with the Monkfish with Miso Brown Butter Sauce. The Monkfish was very tender and fresh – also very filling. The miso brown butter was very tasty – there was a hint of miso and lots of buttery goodness. I would definitely dip my lobster in this!

Even though we were quite full from our entrées, we always have room for dessert! Seamore’s makes it simple by only offering one dessert option – Kaffir Lime Soft Serve from OddFellows. The only options you have are (1) Coconut Granola Topping and (2) cone or cup. We opted for the coconut topping and cones. The soft service was very tasty – just a bit tart and very refreshing after a savory meal. 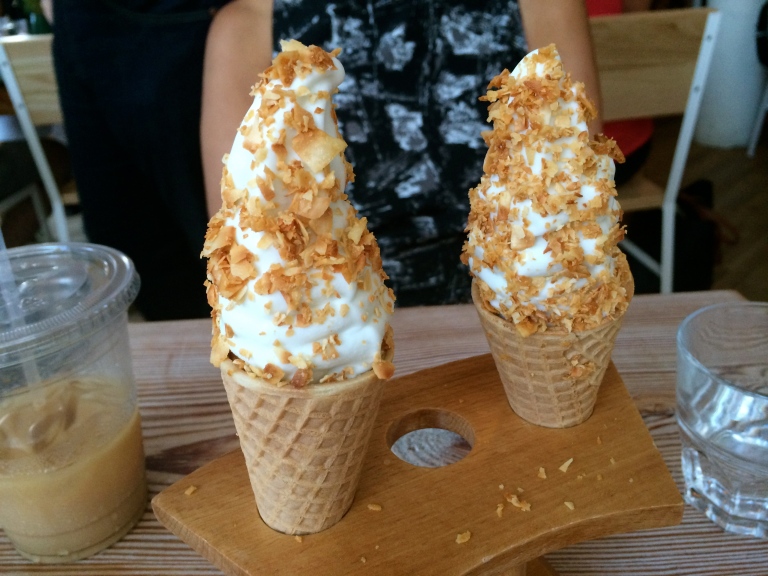 Service was great throughout the meal – our waitress was very attentive and really helped make our first time at Seamore’s effortless. The tables are closely packed together and the music is also quite loud in the high-ceiling dining room so I wouldn’t recommend them for a first date. Their tables are very group friendly, however, so grab some friends and check them out!