Burger and Lobster, a UK based chain that opened last year in the Flatiron district, is a very popular restaurant with over 2,000 reviews on Yelp – and I can’t believe I just found out about it a few weeks ago! Their name pretty much encompasses their menu of just three items – a hamburger, a 1.5 pound lobster, or a six ounce lobster roll – served with a side of salad and fries for $20 each. I was a bit skeptical at first – $20 seems like a bit of a steal for a whole meal – but I was quickly shown the error of my ways. I actually ended up going 2 days in a row, with different people of course! Between my two visits, I was able to try everything on their menu.

The hamburger is perhaps what most people would think is the least best deal since lobster is more expensive, right? But you’re wrong! The burger is actually really, really delicious – and huge too! They use a custom blend of meats (tri-tip, brisket, and chuck) crafted by Pat LaFrieda and according to Eater, the beef has a 70/30 meat-to-fat ratio, which makes it a much richer burger. And clocking in at 10 ounces, it’s a bit bigger than most other burgers as well. We had our burger without any extra add-ons, which allowed us to really get a taste for the meat, which didn’t disappoint. They also have a “special sauce” that they smear onto the bun (which is a hybrid between brioche and potato bread).

The lobster option comes in two cooking styles, steamed or grilled, and comes with either regular butter or lemon garlic butter as a dipping option. They give you a bib and all the necessary utensils to demolish your lobster. We had tried the steamed option and were perfectly satisfied. I’ve heard that the grilled lobster can get a bit tough but I’m sure it offers a bit more flavor! 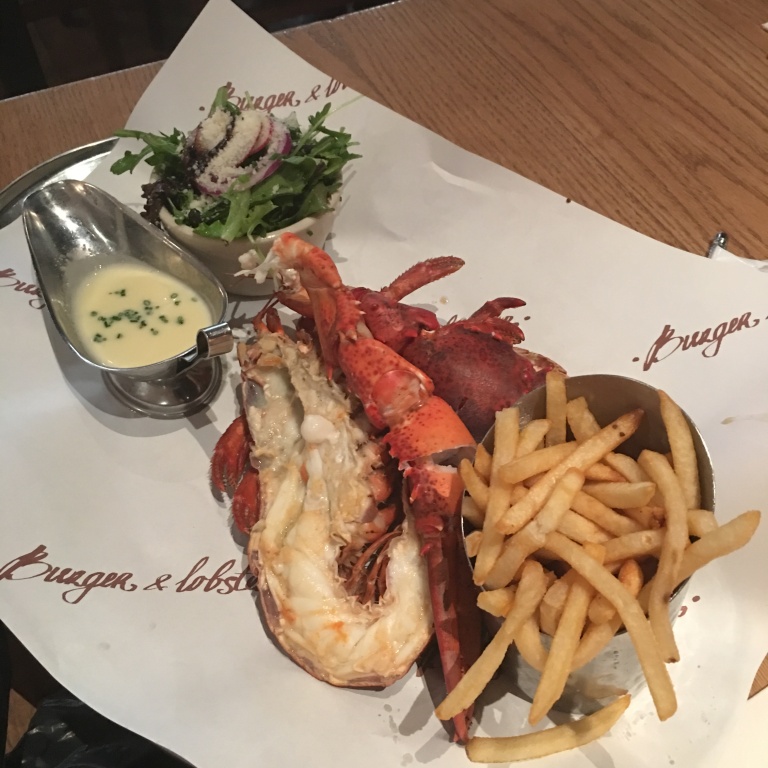 The lobster roll is perhaps their most unique – it’s bigger than most lobster rolls (Luke’s Lobster and Red Hook Lobster Pound contains about 4 ounces of meat) with 6 ounces of glorious lobster meat. The lobster meat is served cold, dressed with Japanese mayo (or Kewpie mayo for some of us) and inside a warm, toasted brioche bun. I really, really enjoyed the lobster roll – and I’m usually not a huge fan of chilled lobster rolls. It was very meaty – it’s very obvious that they use more meat than other places. I also really liked that they used kewpie mayo, which made it stand out among the other lobster rolls in the city.

The venue is very big so they can definitely seat a lot of people. The catch, however, is that they don’t take reservations for parties under 10. And if you’re just walking in, they don’t give you a table until your entire party has arrived. But, there is a high turnover rate for tables since the menu is small and the food comes very quickly. Service was attentive on both of my visits. Extra stars for cooking our burger to the correct temperature!