When it came down to planning the BF’s birthday weekend, I wanted to do something fun and go away for the weekend. Since we only had 2 days and 1 night to spare, it cut down a lot of options. I toyed with the idea of going away to the shore for the weekend, but most B&B’s won’t let you book for only 1 night during the summer season. A co-worker from Michigan clued me into Cedar Point, an amusement park located on a Lake Erie peninsula in Sandusky, Ohio. It’s apparently the, “Roller Coaster Capital of the World”, according to their slogan.

So on a Saturday morning, we piled into the car to drive 2.5 hours out to Sandusky, Ohio. The drive wasn’t too bad – and a lot of it was quite quaint and scenic. We arrived at about 11am and cruised right in with our prepaid online tickets. There is a TON to do at Cedar Point, even if you don’t ride roller coasters (like me). It’s also very kid friendly with Camp Snoopy, Planet Snoopy, and Kiddy Kingdom areas filled with rides. 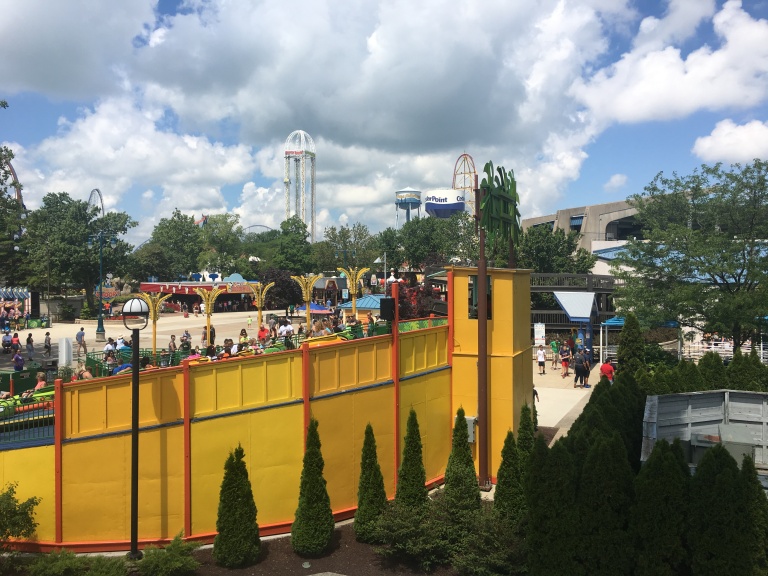 They have a pretty nice Ferris wheel, the Giant Wheel, which goes up 136 feet. It’s considered one of the tallest wheels in North America. The view from the top of the wheel is quite spectacular.

If you’re not afraid of heights, they also have a tower swinger ride, the WindSeeker, which goes up 300 feet in the air. You’re not allowed any loose items, but it offers THE BEST view in all of the rides at Cedar Point, in my opinion.

The BF went on the Blue Streak, their oldest operating roller coaster, the Raptor, and the Rougarou (pictured below). He was on line for the Top Thrill Dragster, which was the tallest and fastest roller coaster when it opened in 2003 (before being replaced by Kingda Ka at Six Flags as the tallest and 1 Formula Rossa at Ferrari World as the fastest coaster), but then it broke down and wasn’t back up for the rest of the day. It looked like a heart attack waiting to happen to me!

I had pre-purchased a Souvenir Bottle Drink Plan online, which entitles you to free refills on your first day. It was so worth it because we refilled our bottle about 10 times during the entire day! We also split an All-Day Dining Plan, which allows you to get an entrée and a side every 1.5 hours. Since we split the plan, we ate about half a meal every few hours, which ended up being worth it in the long run. 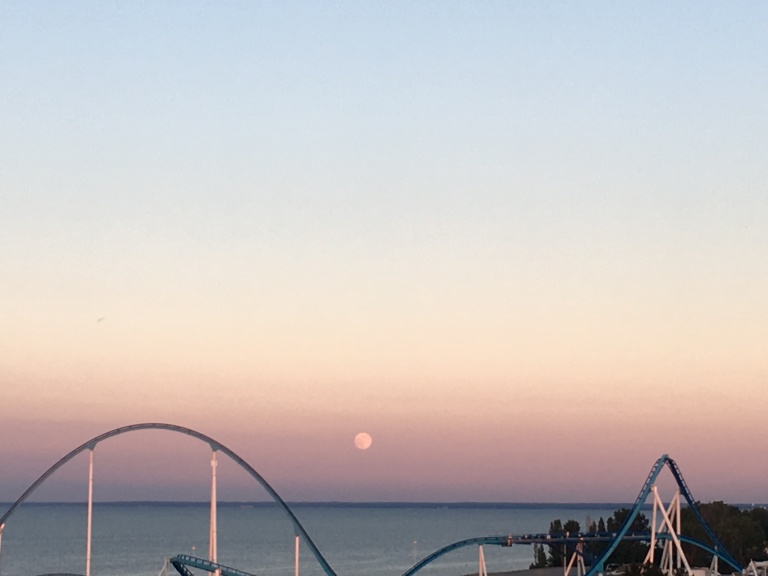 We spent the night at the Farrell House Lodge, which is located in Sunnybrook Trout Club. We were arriving past check-in time, but they were super nice and pre-checked us in and by the time we arrived, our room was ready to go. It’s a super cute B&B close to Cedar Point with very reasonable rates. Our room was clean and comfortable. We met their night manager the next morning when we stopped by for breakfast, which is included! They have an assortment of cereals and pastries but also had hot breakfast made to order. We thoroughly enjoyed our time there and would return if we’re in the area again.

All in all, I think we had a great weekend at Cedar Point. It was large enough to spend the entire day – but not so large that we felt like we couldn’t do all that we had wanted in one day. I highly recommend it if you’re looking for a fun weekend trip.