After watching Anthony Bourdain’s Parts Unknown episode on California’s Korea Town, I was craving some good old Korean food. The Boyfriend’s parents have had Dokebi in Williamsburg before so we decided to go there. The parentals like Dokebi because, unlike K-Town in Manhattan, there’s always space for parking and the service is always better.

We arrived around 6:30 and were seated right away. Our waitress brought over a series of banchans – including kimchi, pickled radish, potato salad, bean spouts, spinach and fish cake. We finished our first set pretty quickly since we had 5 people and they were really nice about bringing over a second set. I love it when a Korean restaurant doesn’t huff-and-puff about bringing over more banchans.

It’s not on their official menu but they do have Happy Hour from 5-7pm and it features $4 drafts and $5 well drinks. The best part is that they have Stella Artois on draft! I don’t often see Stella on draft at a restaurant and when they do have it, it’s not often part of Happy Hour specials. Another extra point for Dokebi!

We opted to start with two seafood pancakes ($7.00 each). The pancakes are smaller than those you’d get at a typical Korean restaurant but they were pretty good. Both pancakes weren’t as crispy as I like them but they do satisfy the craving. 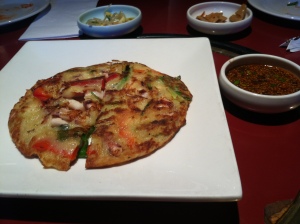 Since everyone raves about the tacos here, I opted to try their Short Rib taco ($4.00 each). The taco is stopped with short rib sautéed in their Korean BBQ sauce and served on two soft corn tortillas. It was absolutely delicious! After watching the show and seeing the Korean tacos served on the famous Koji Korean-Taco truck, I was really craving tacos and this one definitely hit the spot. I can see why some of the other tables only ordered tacos and nothing else. The short rib was so tender and flavorful that I didn’t even need to add hot sauce (but it did taste extra good with some hot sauce). I can definitely see myself coming back just to eat the tacos. 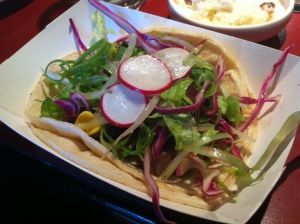 We decided to order one Soondobu ($12.00) to share since we also wanted some other things on the menu.  Their soondobu comes with purple rice, which is a lot healthier for you than the traditional white rice. I also really like the taste of the purple rice because it has a different texture than the traditional white. And now onto the soondobu, which was super spicy. I’ve had my share of soondobu before but this one was extremely spicy! It’s definitely best to mix it with some purple rice before eating. 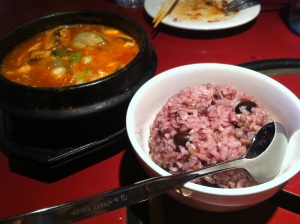 We ordered two Bibimbaps – the Pork Bibimbap ($13.00) and the Mushroom Bibimbap ($12.00). Their bibimbap comes in a hot iron bowl, which causes the rice on the sides to get hard and crunchy. Best part of bibimbap! I was the designated mixer since I bibimbap is my usual go-to-order when it comes to Korean food. I noticed that were was very fair ratio between ingredients and rice in each bowl. Sometimes, when I’m mixing, I notice that there is too much rice in comparison to vegetables or meat. This was not the case here. I thoroughly enjoyed the bibimbap at Dokebi because I had a spoonful of veggies and rice with each bite. 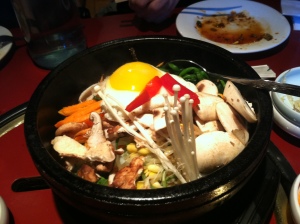 We also ordered one Japchae ($12.00) for the table. We often get Japchae in other Korean restaurants and we wanted to see how Dokebi was compared to the others. I thought Dokebi did a fairly good job. It wasn’t the best Japchae I have ever eaten but it was definitely pretty good. The big issue with the dish was the usage of cabbage. I don’t often see cabbage in Japchae and I actually love cabbage. But they severely undercooked the cabbage in this dish and it gave off a very bitter aftertaste. 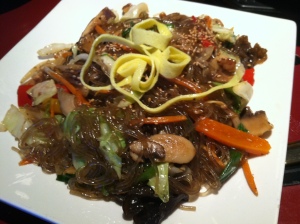 They don’t have any special desserts here but they do have some tongue-soothing gelatos and sorbets. I opted to share the Passion Fruit sorbet ($4.00) with the Boyfriend so we could cool down our tongues after the spicy dinner. The sorbet was very smooth and the semi-sweet and sour taste worked very well after the heavy salt and spice in our dinner. 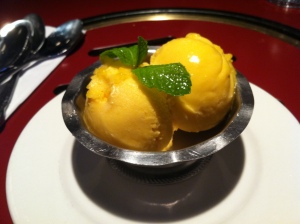 All in all, Dokebi provided us with a very good dinner. It’s definitely not as authentic as the restaurants in Manhattan or Queens but it definitely hit the spot. Dokebi will satisfy your Korean food cravings and give you something new to try