This time we were given a booth on the 2nd floor instead of the 1st floor. Last time, our booth was in between three other booths with couples on either side of us. This time, we were given a booth that was by itself with only one couple behind us. There was a little bamboo curtain that our waiter opened each time he approached our table. He would also alert us whenever he was about the curtain so as to not surprise us. 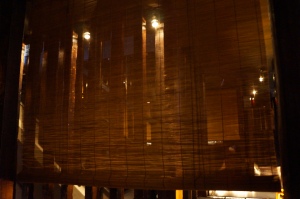 Just like last time, our waiter alerted us that if we needed anything we could press the call button but we didn’t need to at all. He came back periodically to check up on us and pick up any used dishes. We didn’t even need to call him!

First up, was a lightly battered fried cod that was from our waiter for being return customers. It wasn’t a huge portion but it was very nice of them to recognize us. I’m always incredibly impressed by the service at Zenkichi.

Next up was the Cold Fresh Tofu ($7.95) that we have had on our earlier visit. Zenkichi’s homemade tofu is the best I have ever had. Despite the raving reviews others have given to institutions like Hibino, I still think Zenkichi cannot be beat. They have this refreshing dashi sauce that is so light that it doesn’t overpower the tofu. I can come to Zenkichi and order three of these and be completely happy! 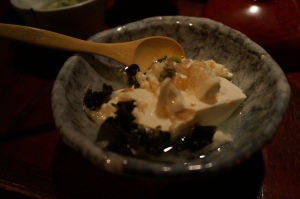 Our second dish was the Kakuni, or pork belly ($10.95). The Pork belly is another repeat dish but it was so good last time that we had to have it again. Their pork belly is very savory and filling. The pork belly is always very tender and flavorful. The best part, however, is the fact that one order is more than enough for the two of us to share. 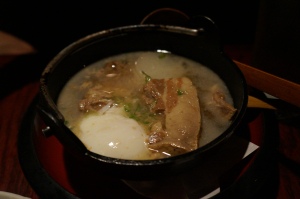 For our second visit, we wanted to try something new so we opted for the Tsukune Chicken ($10.95), which are chicken meatballs cooked on a bamboo stick and served with soft egg dipping sauce. They cook their meatballs in one stick instead of separate chucks. They have a bamboo scooper for you to cut the meat with. The presentation wasn’t what we’re used to but it was definitely flavorful. The meat was very soft and chewy. The dipping sauce, which is served cold, was a very nice contrast to the hot meatballs. 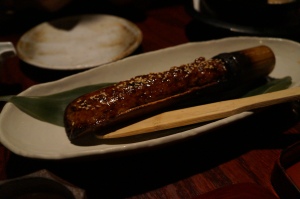 Our last hot dish was their Hot Udon ($14.95). The udon was incredibly soft and chewy. I could tell this wasn’t your typical dried-just-put-in-boiling-hot-water udon that you buy in supermarkets. This was very fresh and well-cooked udon. The broth was a simple bonito-dashi broth, which was nice and sweet. It wasn’t too salty or over-spiced. The portion-size was also great to share between the two of us. We each got a serving size of two bowls of udon each! 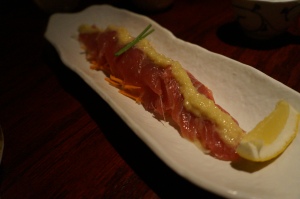 After our main dishes, we opted for one dessert to share since we were pretty full. We’ve read great things about their Grapefruit Gelee dessert but we opted for their Frozen Black Sesame Mousse ($6.95) since we enjoyed it so much last time. The thing I like about this dessert is that it tastes like sesame ice cream but doesn’t have the same frozen texture. I hate it when ice cream gets freezer burn! The Sesame Mousse is sweet enough without being too sweet, which is exactly what I look for in desserts. 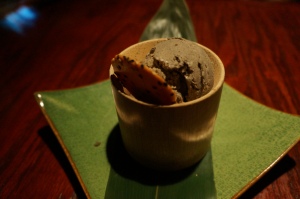 There is absolutely nothing bad I can say about Zenkichi. I love this place because I never feel rushed and I always feel like I have the utmost privacy. I can hear the conversations around me but it was never too loud. I never felt like I was sharing dinner with anyone else at the restaurant except my date. The best part? Kids under 14 aren’t allowed in the restaurant so you’ll never have any crying or tantrum-throwing children ruining your meal. You also don’t have to worry about children running all over the restaurant and knocking things down. When you’re trying to have a romantic date, Zenkichi is definitely the place to go.