The first time the Boyfriend and I tried to have breakfast at Clinton Street Baking Company, we underestimated their popularity. We arrived at 9:30am (they open at 8:00am) and were given a 1-hour wait time. Since we had other plans afterwards, we opted to head over to the trusty Cornerstone for breakfast instead.

The second time we tried to have breakfast at Clinton Street, we were given a 20-minute wait time instead (we arrived at 8:30am this time). We decided to stay and wait since we had made the trek over. After about a 25-minute wait, the hostess called for us and we were seated at a table-for-two by the kitchen. I didn’t really mind since I got to take a peek at all the delicious food coming out.

I was caught between their famous Blueberry Pancakes or the Smoked Salmon Scramble since I love smoked salmon. I finally decided on the Smoked Salmon Scramble ($17.00) after some deliberation – the pancakes would have to wait for next time. The dish features eggs scrambled with smoked salmon and scallion creamed cheese, a side of mixed greens and 7-grain toast. These were the best scrambled eggs I have ever had. The eggs were fluffy, the smoked salmon was delicious and the scallion cream cheese gave the dish a definite kick. I highly recommend the scramble!

The Boyfriend opted for the Country Breakfast ($13.00), which features three eggs any-style, maple-cured ham, hash browns and a buttermilk biscuit. The eggs were fine and the maple-cured ham was quite delicious. I didn’t steal much from his plate since I was so concentrated on mine. But I must remark on the biscuit. I’m not usually a fan of biscuits in general but Clinton’s Strawberry Jam is to die for! I could gladly come here just to eat the biscuits with that jam. The jam was very fresh and tasted like real fruit. Mmmm! 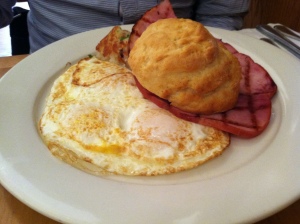 We also got a side of Onion Rings ($7.00) since the Boyfriend hasn’t had them in a very long time. Onion rings aren’t really your typical breakfast food but they were pretty darn good. They didn’t leave either of us with onion breath, which was a big plus.

I wanted to order a piece of their Chocolate Banana Cream Pie to go but they didn’t have any that day. I’m a big fan of Banana Cream Pie so I was pretty sad when our waitress returned with just our check and no pie. I guess this means I’ll have to come back soon to have a slice! I definitely want to return to try the pancakes.