Almost every season of Restaurant Week, the Boyfriend and I try to pick one restaurant to go to. We usually end up picking somewhere a little out of our normal price range. This season, we went with Cafe Boulud, located on the Upper East Side.

After we were seated, we were given menus to look over. They include both the Restaurant Week prix fixe menu and their regular a la carte menu so you don’t have to ask specifically for either one. Their RW menu includes 3 options for appetizers, entrees and dessert. After we ordered, we were presented with the Amuse-bouche of truffle risotto balls, which were served hot and crunchy. They were pretty good and I probably could’ve sat there and eaten a whole plate of them!

I opted for the Duck Terrine, which was served with whole grain mustard, pickled vegetables and toasted sourdough bread. The terrine was very good – it was quite smooth and not too salty at all. I wished there was more sourdough to go with it though.

The Boyfriend opted for the Escarole Salad, which contained grilled red onions, sunflower seeds, shaved sunchokes tossed in a parmesan vinaigrette. We both thoroughly enjoyed this salad. We don’t often rave about salads because it is a pretty standard appetizer but this one was very fresh and light.

For my entree, I went with the Pan Seared Trout, which is served with winter bean fricassee, black olives and lemon zest. I loved it! The trout was seared to a perfect color – just a tad pink on the inside. The skin was crispy while the inside was soft and melted in my mouth. I’m usually not a big fan of beans, but the fricassee was pretty good.

The Boyfriend opted for the Rutabaga Agnolotti, which are little dumplings served with a brown butter, cranberry, and ricotta salata sauce. The portion size was pretty small – but then again a lot of French dishes are small. It’s a good size for lunch but definitely not enough to fill up for dinner. 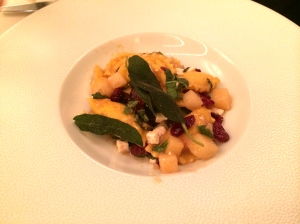 The Boyfriend went with the Red Velvet Gateaux, which was gorgeous to behold. The piece of cake was served with toasted almond ice cream, which helped to temper the sweetness of the red velvet. I liked that they didn’t use cream cheese like in all other red velvet cakes I’ve had – this one was light and delicious. 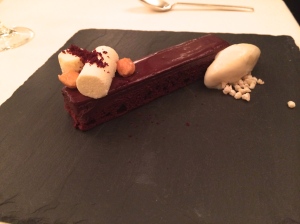 Halfway through our dessert, we were presented with a complimentary small basket of Madeleines, which were served nice and toasty. I  loved them! 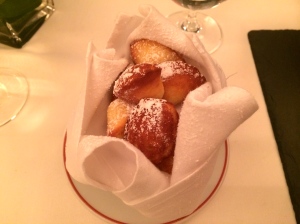 Service was prompt and we never sat too long with empty dishes. I do wish that the service wasn’t as prompt because we ended up feeling a bit rushed throughout our meal. The food was very good, but I do wish we had more time to enjoy it and the atmosphere.

One thought on “Cafe Boulud”