It’s time for my annual trip to Smorgasburg! Every summer, the Boyfriend and I try to make it to Smorgasburg at least once to try out the new vendors. We always see some familiar stands – Red Hook Lobster Pound, Mimi & Coco, Blue Bottle Coffee Company, Dough, Brooklyn Soda Works, and Mighty Quinn’s. But every year, there are brand new stands that we’ve never seen before – and definitely want to try out.

We arrived around 11:00am, which is when they open, so we walked around to take a look at all the stands first. Our first stop was at the Ramen Burger stand. Despite trying it last summer when it first came out, we both wanted to get one this time. Because we were there just when the stand opened, we only waited about five minutes since we were 3rd in line. This time around, they have cheese option – I’m a cheese lover so I opted in. Each burger with cheese comes up to $10 each, which is a bit pricey but you’re paying for a delicious burger! I actually prefer having the cheese on it since it gives the burger a bit more flavor. I only wish the burger wasn’t so fully cooked! 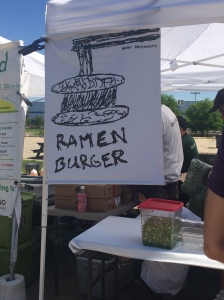 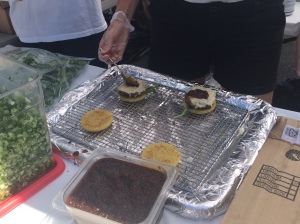 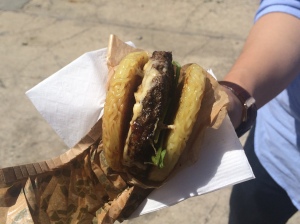 After we polished off our ramen burgers, we walked around a bit more to see all the options. We walked by Lonestar Empire just as they pulled out a beautiful piece of brisket. The smell and amazing appearance hooked us and we ordered their Slow-Smoked Texas style Brisket Sandwich ($9.00). You get your choice of moist, lean or a mixture of the two so we went for the moist. They have a few toppings you can add on to your taste but we decided to do it plain. The brisket was so soft and tender! It was very well flavored. We’re both not big brisket fans but this one definitely changed our minds! 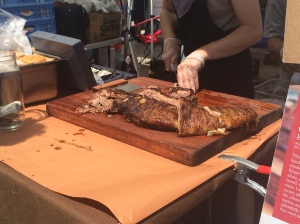 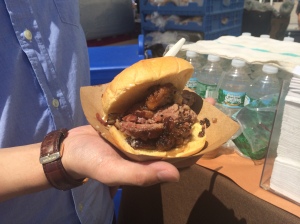 By now, we’re getting pretty hot so we stopped by People’s Pops for some Shave Ice ($2.50). They have two flavors and we opted for the Plum Orange Blossom flavor, which was both tart and sweet. The shave ice takes a long time to melt so it’s great for snacking on while you walk around the stands.

At 12pm, the beer garden opens so we went straight in for some day drinking! I opted for the Rum Punch ($12.00). They use a good amount of rum in the cocktail so it’s at medium strength. It was just enough rum for me to taste it but not so much that it was like a punch in the face. It was nice and refreshing – I love summery-tropical drinks! 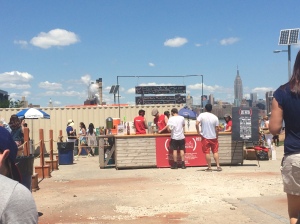 We then headed over to Ca’pisci for some Calamari Salad ($8.00). They toss chunks of squid, tomatoes and homemade croutons together to made this calamari salad. It’s a better deal than their squid sticks, which are the same price. It’s light and refreshing and a must have if you’re a squid fan! The salad was a perfect for the hot weather because it’s chilled. 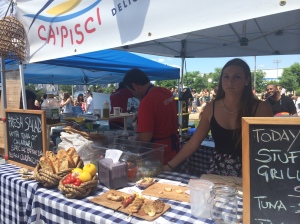 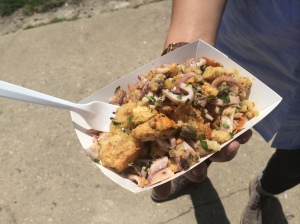 My favorite drink of the day, which I went back for seconds of, was from Bellocq, which sells loose leaf teas as well as two iced teas. The iced teas of the day ($3.00 each) were #21 White Nixon Tea and #82 The Phoenix. Both teas are white teas and taste amazing chilled. I had the White Nixon Tea, which has hints of white peony and grapefruit while the Boyfriend had The Phoenix, which has hints of fruit, orchid and honey. We both agreed that the White Nixon is better suited for summer since it is fruiter and lighter. We finished both our teas and went back for a second cup!

For dessert, we went with an ice cream sandwich from The Good Batch. A friend had previously Instragram-ed a picture of the Nutella-Chocolate Cookie Ice Cream Sandwich ($6.00) from them so I knew I had to try that one. And it was a great decision because it was so good! The cookie was just hard enough to hold the sandwich together and the nutella + nuts in the sandwich made it both smooth and crunchy at the same time. I quickly gobbled it up and hardly left any for the Boyfriend!

If you haven’t been to Smorgasburg yet, I really recommend that you make a trip soon! There’s so many different cuisines to try out – there’s West African, Ethiopian, Columbian, Japanese, Chinese, Korean, American, Mexican, and so much more! But remember to go early or else there will be huge crowds and lines.