The Boyfriend and I originally had plans to have lunch elsewhere in the Village, but since he was a tad late for the original reservation, we decided to wander around and see what else there was to eat. We stumbled upon Gottino after walking around for about ten minutes. They were pretty empty for lunch so we had our choice of seats.

Gottino looks like an amazing place to have drinks with friends and catch up. As it was lunch time, we just ordered a few plates to share. Their wine menu looks pretty extensive though!

We started off with an order of the Prosciutto Di Parma, aged 24 months and shipped in from Italy ($14.00). This was served with a side of bread and olive oil. We both haven’t had prosciutto in a while so this really hit the spot. The Prosciutto was really good – just the right amount of salty.

We decided to go with two Crostinis ($8.00 each) – Pesto Di Noci, or walnut pesto with parmesan and thyme, and one with goat cheese, fig, honey and crushed almonds. The walnut pesto was okay – it takes a few bites before you get used to the flavor. The goat cheese, however, was super delicious. It was sweet and tart at the same time because of the honey and the fig. The crushed almonds contrasted nicely with the smoother texture of the goat cheese. Definitely give this one a try! 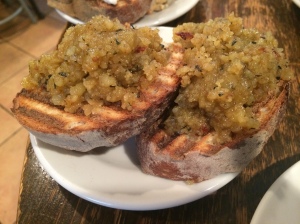 Our last shared plate was the Steamed Egg served with Smoked Salmon ($10.00). The steamed eggs were nice and hot when they arrived. It tasted pretty good by itself but it tasted even better when put on bread with salmon. The smoked salmon was very flavorful and very fresh.

We were both pretty full by the time we finished our meal – there was so much bread! But I definitely want to be back to try out their other cheese and meats. They didn’t have waffles that day – but both the waffles and crepes sound really good! Service was attentive and on point. We received our dishes in a stacked manner so we weren’t overwhelmed by food. They don’t have a real kitchen so everything is prepared by the bar area.