I’m a huge fan of Thai food – both authentic and Americanized. Sometimes I just get a craving for some Pad See Ew, which my boyfriend tells me they do eat in Thailand but it’s not common (source: his aunt is from Thailand). But sometimes, you want to try something that you haven’t eaten before and that’s why we love the new influx of Northern Thai restaurants like Somtum Der. When I heard that the folks behind Somtum Der were taking over the space left by Cafetasia by NYU, I was instantly interested.

We arrived at around 6pm on a weekday night and were seated by the windows. They run Happy Hour every day from 4pm to 7pm. You get 20% off all noodle dishes and ½ off the price of all drinks. It’s a pretty sweet deal since it’s basically buy-one-get-one free cocktail.

We opted to try their non-alcoholic drinks since I knew we’d be eating some spicy dishes and would need the extra liquid to cool down our tongues! I had the Tropical Sunset ($6, HH price of $3), which features a mixture of mango juice, orange juice, pineapple juice, and grenadine. It was very tasty – flavorful without being too sweet. The Boyfriend got the Vermillion ($6, HH price of $3), which is a mixture of fresh raspberries, lychee guava juice, lime and ginger ale. Look at how pretty they look!

We started with the Golden Bag ($8), which features diced potatoes, shiitake mushrooms, carrots, water chestnut, corn, green peas, and cream cheese wrapped in rice paper and lightly fried to keep the bag shape. I’m not normally a fan of things that resemble fried wontons but these were so good! The rice paper was only lightly fried so they were a bit crunchy but not hard. The mixture in the bag blended so well together and tasted really good with a sweet chili sauce on the side.

We opted to split two entrees instead of each ordering our own – this way we would try out more dishes! The first to come were Grandma’s Grilled Pork with Grilled Coconut Sticky Rice ($13). The minced pork patties are caramelized with milk when they’re grilled so they were sweet and salty at the same time. The grilled sticky rice was a bit crispy on the outside and super soft on the inside, which had a great mouth feel. A bite of pork and a bite of rice = best combination! 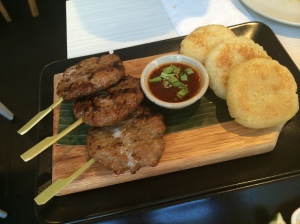 We decided to take advantage of the 20% HH deal off noodles and ordered the Pad Thai Shrimp with Egg Crepe ($15, HH price $12). I’ve been told that traditionally, pad thai is served this what in Thailand so this was pretty cool. The rice noodles are sautéed with shrimp, silken tofu, egg, bean sprouts, peanuts and chili peppers. Our waitress said it wasn’t really that spicy but we both thought it was pretty spicy. There were lots of water involved while eating this dish – but we wouldn’t stop because it was so flavorful and delicious. 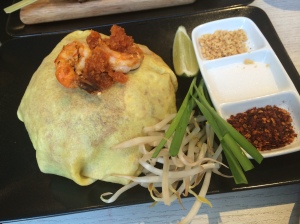 We finished our meal with a pot of Jasmine Tea ($5) to share and an order of their Green Tea Panna Cotta ($7), which is served with sweet milk. The dish was super cute and also super delicious. The sweet milk helped cut the bitterness of the matcha in the panna cotta. The panna cotta was textured perfectly – it was smooth without being so fragile that we couldn’t keep it on the spoon. 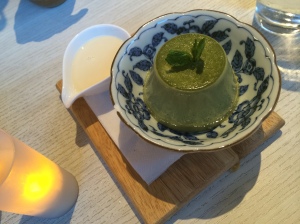 Service was attentive – sometimes a bit too attentive with their rush to take away plates. But they did leave us alone with our tea and dessert for almost an hour. We arrived at 6pm and didn’t leave until a little after 8pm and we weren’t rushed at all to leave. Make sure you make a visit to the bathrooms before you go – there are 3 stalls but it’s completely unisex.