I discovered the deliciousness that is Wok Wok for the first time just last month. We learned about Wok Wok through a friend, who told us they order take out from there all the time. I had no idea that the Lobster House that used to be in the Wok Wok space even closed – let alone a new South Asian restaurant opening up! We decided to try it out since we were sick of always going to Nyonya and New Malaysia for Malaysian food. And we were pleasantly surprised!

The décor looks like it belongs in a trendy neighborhood like the East Village or Williamsburg. The interior is all wood planks and earthy colors. There’s a chalk board on the right side wall with hand-drawn images of items on the menu. Speaking of the menu, Wok Wok specializes in hawker food – or street-style food from South Asian countries. I’m a huge fan of street foods and small bites, so this was plus 1 point already for me!

On our first visit, we decided to order a bunch of appetizers to share so we could try more things. First up was the Roti Canai ($3.75), which came with a bigger portion than the other Malaysian restaurants in Chinatown. The roti was soft and crispy at the same time. The curry chicken and potato dipping sauce was flavorful without being too spicy.

Next we had the Kaya Butter Toast ($2.50), which features homemade coconut pandan jam, or kaya, on buttered toast. This was phenomenal! Not many places serve Kaya Toast in NYC – let alone homemade kaya. Kaya is a staple in Malaysian breakfasts and it’s super tasty – a hint of sweetness. They sell containers of their homemade kaya butter for $6.00 by the counter.

Following the toast was an order of the Satay Chicken ($5.50), which comes with four sticks of charcoal grilled chicken with a sweet + spicy potato dipping sauce. The portion size is a bit small for the price but the chicken was tender and the dipping sauce was delightful. 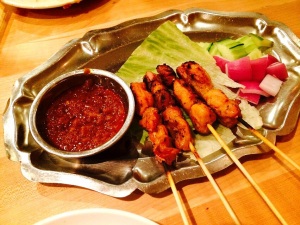 We also ordered the Thai Lettuce Wrap ($6.95), which might have been my favorite dish of the night. The dish comes with fresh lettuce and chicken cooked in a lemongrass marinade. The chicken was so flavorful and fragrant! I highly recommend this dish.

On our next visit, we decided to try some new dishes. I’d like to particularly point out the Squid with Water Spinach, which comes in a huge portion size. The squid is cooked perfectly, crispy and chewy. The spicy peanut sauce on top of the squid and water spinach was perfect to eat with rice. Even though I’m not a fan of peanuts, I gobbled this dish up.

The Hainanese Chicken Rice Bowl is also a highlight – the portion size is huge! I feel like you definitely get more chicken here than at the other aforementioned Malaysian restaurants. They separate the chicken and the rice into two separate bowls so it’s easier to eat, which I appreciate. I hate getting chicken bones in my rice!

Service is always attentive and the servers are super nice. They’re willing to answer any questions on the menu and are very knowledgeable. I also highly recommend ordering a Malaysian Milk Tea or Coffee to go with your meal – they make it just right!

One thought on “Wok Wok”