When I first started researching things to do in Edinburgh, I toyed with the idea of taking a Highland Tour out to see Loch Ness and Inverness. However, in order to really see the Scottish Highlands, you need a minimum of 2-3 days. We didn’t want to do a short one-day tour that wouldn’t do the beautiful countryside justice, so we discarded the idea. A few weeks before we were due to depart, I discovered the Hairy Coo Free Scottish Highland Tour.

True to its name, the tour is really free! All you have to do is pay what you think the tour is worth at the end. You can give as little or as much as you want. All proceeds from your tour goes back into the company to provide more free tours. Their goal is to make sure that everyone can enjoy a bit of Scotland.

Seats are first come, first served so we arrived about 15 minutes before the meet up time and were the first on the bus. Our tour guide, Brian, provided us with a wealth of knowledge about Scotland and its history. He was so much fun – and so knowledgeable!

Our first stop was the village of South Queensferry to see the Forth Bridge. The bridge opened in March 1890 and is a UNESCO World Heritage Site. At 1,709 feet, it is the world’s second-largest single cantilever bridge.

Our next stop was the Wallace Monument in Stirling. On the way, Brian told us all about William Wallace, a Scottish knight that became one of the main leaders during the First War of Scottish Independence. The monument sits on top of the slopes of Abbey Craig, which is about a 15 minute walk from the parking lot. There is also a shuttle bus that comes every 15 minutes that will take you to the base of the monument.

The monument base is free to visit and offers a fantastic view of Stirling and Stirling Castle.

To go up the monument, it costs £10.50 per person and requires a climb of 246 steps. There are three exhibits (The Hall of Arms, The Hall of Heroes, and the Royal Chamber) in between those steps, so you do get a bit of a break in between climbing the spiral staircase. The top of the monument offers a 360 degree view of Scotland’s historic heartland. I highly recommend doing it if you’re physically able.

After the Wallace Monument, we headed to the Lake of Menteith, which is often considered the only lake in Scotland. On our way to the Lake, Brian gave us a bit of information about lochs in Scotland. All lakes are essentially lochs, but since lake is an English word, they don’t use it. Fun fact: lochs can be fresh or salt water lakes.

After lunch, we headed over to Loch Katrine, which inspired Sir Walter Scott’s poem, The Lady of the Lake.

And now we’re at the highlight of the tour – a Hairy Coo visit. Hairy Coo’s, or Highland Cattle, as they’re officially named, are a Scottish cattle breed. They have long horns and long, wavy woolen coats. Their defining feature? Their bangs!

The Trossachs Woollen Mill is home to 2 Hairy Coo’s – Hamish Dhu, Honey, and their baby coo. We were told that they like apples, carrots, and potatoes. Brian had 2 bags of potatoes ready for all of us to feed the Coo’s. This was perhaps my favorite part of the entire tour. They were so cute! 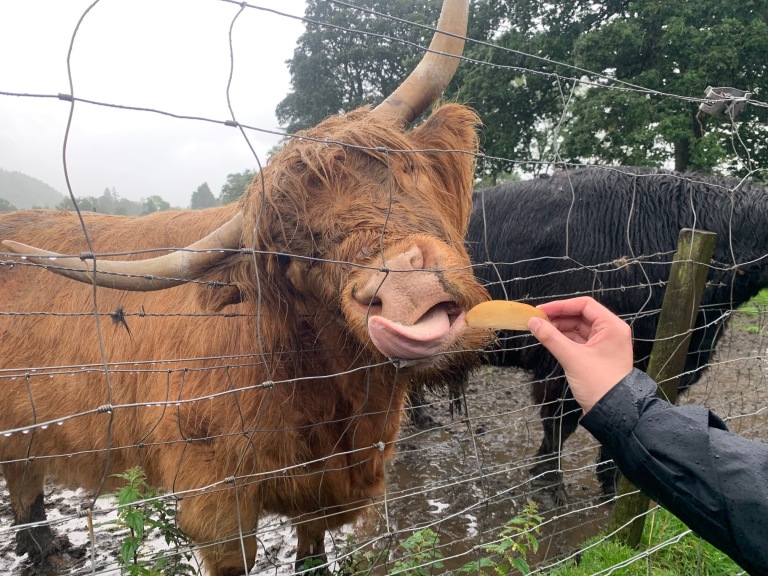 Our last stop on the tour was Doune Castle, a 14th century castle that was used to film Outlander, Monty Python and the Holy Grail, and Game of Thrones. To go inside, it costs £9 per person. Your entry includes an audio guide, which has tons of great info about the castle as well as Outlander facts. 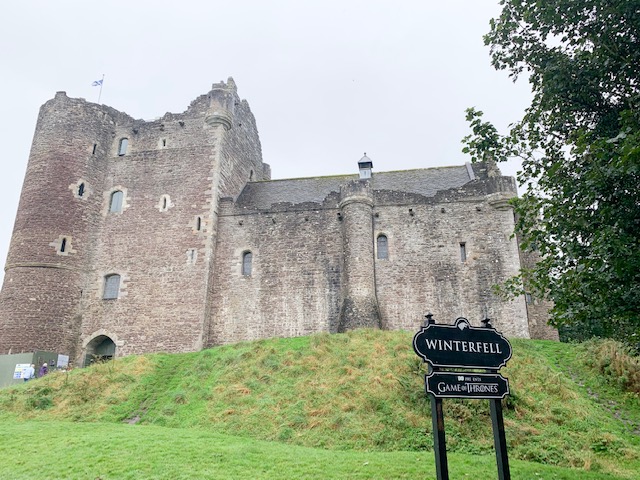 It was really interesting to see how kitchens and bathrooms worked back in the day!

Our tour was amazing and it was really nice to be able to get out of Edinburgh for just a short while. It definitely cemented our desire to return to Scotland to see the Highlands.

One thought on “The Hairy Coo”