After the Boyfriend took me to Bozu for my birthday, I knew I had to find something to top that. If I’m considered a foodie, then the Boyfriend is even more so. He’s been to more restaurants than I have and knows about even more. After a lengthy Yelp search, I came up with Sakagura. There were a lot more choices – including Sushi Yasuda, Hatsuhana and Bohemian – but we decided on Sakagura because of their intensive sake collection.

We arrived around 5:56 and they were still closed. Sakagura opens at 6pm on the dot and starts taking diners at that time. We were seated right away in a table for two by the bar. A quick glance around the room told us that pretty much every table – including every seat at the bar – already had reserved signs on them. When I had called a week in advance to make reservations, they had told me they would need the table back by 8:30pm because someone had booked it for then. Quick tip: make reservations or else you’ll be waiting for quite some time!

We started off looking at their sake menu because we had already looked over their menu online before visiting. There were so many sake choices to choose from that we took quite a bit looking over the menu. Most sakes were offered by glass, by carafe, by matsu (little wooden box) or by bottle. We decided to go with a carafe because it would allow us to share better than the matsu. After a while, we decided on Sakagura’s recommended sake – Naraman Origarami Nigori ($14 per carafe). The sake was frosty and had faint yogurt and lychee flavors. The carafe was just enough for the both of us – we each had about 4 refills. 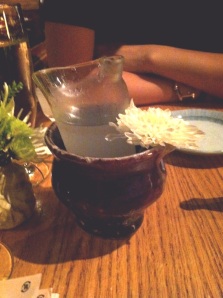 Our first dish to arrive was the Buta Kakuni ($5 per piece) or their special stewed pork belly. Don’t be tricked by the fact that they charge per piece because each piece isn’t tiny. Each piece of pork belly is a nice cube of about 3x3x3 inches. The dish was served steaming hot and melted in our mouths. The meat was substantial without being stringy or overcooked. I definitely recommend adding this to your dish lineup. 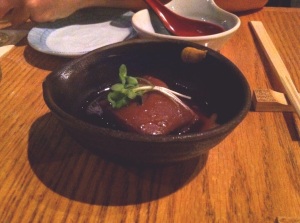 Our next dish was the Surumeika Yaki ($7.50), or grilled japanese squid brushed with a garlic soy sauce. The squid was served room temperature and tasted very different from other grilled squids that I’ve had before. The garlic soy glaze was a bit salty but the smooth texture of the squid more than made up for it. 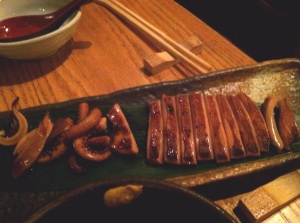 Just as we finished up the squid, our order of Tori Karaage ($7.00), or deep fried chunks of chicken marinaded in sake and ginger infused soy sauce. The fried chicken came out super hot and steaming – they had just fried them up. We couldn’t even put the entire piece of chicken in our mouths because it was so hot. The thing that I liked most about this dish was the fact that the chicken was still very moist despite the frying. It was not dry at all. 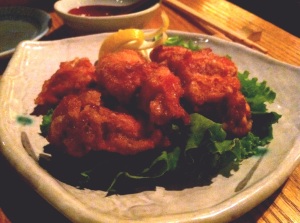 While we were finishing up our steaming hot chicken, our order of Gyu Miso Mikomi ($6.00) or shredded beef back ribs stewed in miso and topped with grated daikon radish. The dish may look small but we were both very surprised by the amount of beef that was inside the bowl. The stewed broth that came with the beef was very good – it was thick and flavorful. Poured on top of the chewy and melty beef meat, it was delicious. The grated daikon radish also tasted very good with the stewed broth. This is definitely a dish I wasn’t expecting to taste so good. 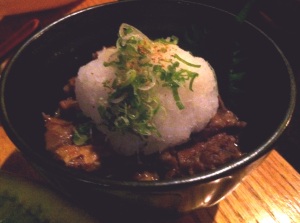 Our next dish was one of the Boyfriend’s favorites of the night. He even declared it his favorite dish before our last one arrived. Gindara Yuan Yaki ($9.50), or grilled fillets of cod fish steeped in a sweet soy sauce, was very good. The fish was very tender and flavorful. The fish skin, however, was my favorite part of the dish. It didn’t taste like other fish skins I have had – it was moist but still had a nice texture. 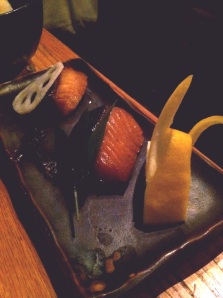 Our final savory dish of the night was our mutual favorite – Sake Oyoko Don ($16.00), which features fresh salmon sashimi and salmon roe served on top of a bowl of rice. The Don is also served with a bowl of miso soup, which tasted very different than your usual miso soup. The soup had a meatier taste and a darker color as well. But the salmon don was the highlight for sure. The salmon roe was very fresh. Even the Boyfriend, who doesn’t normally like salmon roe, gobbled up every little bubble. The salmon sashimi was also very fresh. Put some rice on the spoon, top with salmon roe, a slice of salmon sashimi, and soy sauce – this dish was fantastic. Definitely a must have! 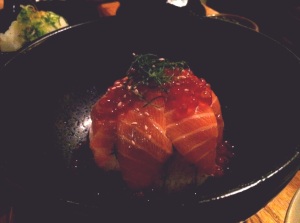 Our dessert, as per Yelpers’ recommendation, was their Black Sesame Crème Brûlée ($9.00). The Crème Brûlée was served with a scoop of black sesame ice cream and a black sesame cracker. As someone who doesn’t like sesame seeds in any way, shape or form, I really enjoyed this dessert. The Crème Brûlée wasn’t too sweet and the burnt sugar on top was not bitter at all. The crème wasn’t very pleasing to the eye since it was a grey color, but do not let the color fool you. It is very, very good. 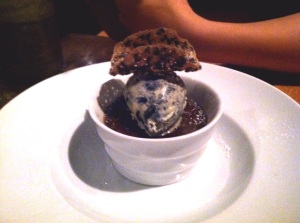 Both the Boyfriend and I thoroughly enjoyed our meal at Sakagura. The food came in perfect timing and the service was attentive and prompt. Despite the fact that it wasn’t our main waitress bringing us our dishes, she came by to check up on us and refill our sake glasses often. Sakagura offers a cup of hot green tea after meals, which was very nice. The tea was so good that we had to ask our waitress what tea it was (HojiCha). The dishes were also just right. Many on Yelp complain about the size of of the dishes but we both thought it was just enough to get a good taste of each dish. With six dishes and one dessert, we were both pleasantly full by the end of our meal. The prices weren’t too expensive either. For 6 dishes, 1 dessert and 1 carafe of sake, our bill came up to $86 before tip. Not bad for a restaurant with 4.5 stars on Yelp!