Summer vacation for my family for the past few years has been various cruises throughout the Caribbean and even Hawaii. This summer, we decided on Orlando, Florida since the last time we visited was when I was 10 – more than 11 years ago. We decided on 3 days at Disney followed by 2 days at Universal Studios. It was a very short vacation compared to our usual, but between work and school, a week was all that we could spare. We opted for Disney’s dining plan which gave each person one snack, one quick service and one table service meal a day. Since I love food so much, I knew I had to look up menus and make reservations ahead of time. Good thing I did because a lot of restaurants were already booked during dinner time two weeks in advance.

For our first night there, we opted for a pool day. I figured we could have dinner in Downtown Disney and do some pre-park shopping. After reviewing the restaurants participating in the dining plan, I decided on Cap’n Jack’s Oyster Bar located in Downtown Disney. There were a lot of options on the menu but after hearing the Chef’s Recommended Dish of the Day, I knew I had to order it. The Dish of the Day was a clam, mussel, chicken and potato stew. Our waitress brought me over the pot of stew and a bowl. She poured some of the stew sauce into the bowl and told me to dip everything I pulled out of the pot in the sauce. She made a great recommendation because the sauce was amazing.

My mother decided to go with their Baked Salmon Fillet, which was very nicely cooked and flavorful. I actually stole more than a few bites from her dish. My sister went with the Shrimp and Penne Pasta dish cooked in lobster sauce, which was also very flavorful. The lobster sauce was creamy and delicious. Each dining plan also comes with dessert, so I went with the Key Lime Pie, which was had a heavy lime flavor. My favorite dessert of the night would have to be my sister’s Double Chocolate Cake with Ice Cream. The cake was more of a lava cake was very sweet. My sister almost couldn’t finish it because the portion was so big! The service, as per Disney standards, was perfect. Our waitress was friendly and quick throughout the entire meal.

Day two of our Disney adventure led us to Tony’s Town Square Restaurant located in Magic Kingdom. Our visit to Tony’s started off badly since I had a reservation but was still told to wait for our table. Our total wait time by the time we were seated was about 30 minutes. Our entire party was kind of upset because we had purposely made reservations to prevent this type of wait. We actually missed our fast pass return time for a ride because dinner took so long. Tony’s saving grace was our waiter and the food. Our waiter was very friendly and offered very quick service. Our food came in no time at all.

Both my mother and I went with their New York Strip Steak, which is cooked in a red wine sauce and served with potatoes and vegetables. This was one of the best meals I had during this vacation. The steak was cooked just the way I requested and retained a lot of juice. My sister went with their Seafood Diavolo, which featured linguini pasta with clams, mussels, calamari, shrimp, and fish in a spicy tomato sauce. Her dish was very flavorful and the spice was never overwhelming. I found myself stealing bites from her dish! 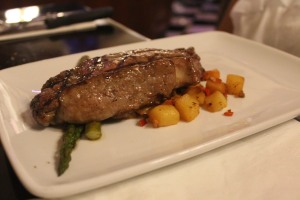 For our dessert, I went with their Pistachio Crème Brulee, which was very sweet. My favorite dessert was my sister’s Signature Cheesecake, which came with the cutest Lady and the Tramp syrup drawing. At first we thought that the drawing was etched into the plate but soon realized it was drawn on. Extra points for creativity! 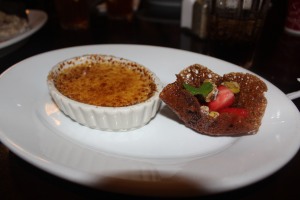 Our last day at Disney brought us to Yak and Yeti, located inside Animal Kingdom. Yaki and Yeti is located inside Animal Kingdom’s Asia section and therefore features Pan-Asian cuisine. We didn’t have reservations but our wait time was only around 10 minutes. Our waiter, Brian, was very friendly and checked up on us often. Their drink menu had such interesting names – many of which sounded very good. I decided to go with their Shanghai Express drink, which I’m included mango and peach flavored alcohol.

After a long look at the menu and some recommendations from our waiter, I decided to go with their Crispy Mahi Mahi, which is a filet of mahi mahi covered in Panko, or Japanese bread crumbs and then doused in a sweet and sour Cantonese sauce. The dish came with jasmine rice and stir-fried vegetables. The mahi mahi was very fresh and tender. The best part was the sweet and sour sauce – it was tangy and definitely helped me develop an appetite.

My mother ordered their Seared Miso Salmon, which was to die for. The salmon was soft and juicy. It wasn’t overcooked at all. My sister’s Duck with Anandapur glaze was also very good. The dish was very big since it featured half a baby duckling. The duck was juicy and not tough at all. Usually our family isn’t into Americanized-Asian cuisine but in this case, we were very satisfied.

On one of our Universal days, we decided to have dinner inside our Disney resort – Caribbean Beach Resort. Caribbean Beach has two dining options – Old Port Royale food court and Shutters restaurant, which serves up Caribbean themed dishes. We didn’t have a reservation but was seated fairly quickly. Our waiter was, like all other Disney restaurants, very friendly and attentive. I decided to go with the Jerk-Crusted Yellow Fin Tuna, which features pan-seared tuna with a papaya-mango sauce. The tuna was delicious! I always say, the best way to eat tuna is either raw or seared and this dish was seared to perfection. The mashed potatoes were also very delicious. 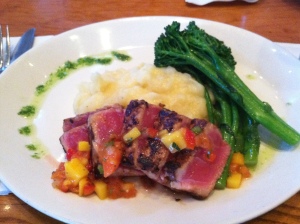 We went with their Tres Leches as our dessert. Soft caramel cake was topped with coconut whipped cream – perfection!

A lot of our quick service meals were unmemorable but there is one favorite that I must share. Aloha Isle, located in Magic Kingdom, serves up a wonderful Dole Whip float. Their soda floats are also a refreshing treat on a hot day. They both count as a snack option on the dining plan so I think this is your best deal for snack within Magic Kingdom. 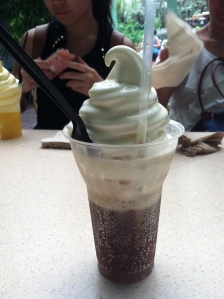 Overall, I can’t complain about Disney’s dining. Their quick service options aren’t very memorable but their table service options were above my expectations. These were not the best meals I have ever had but considering how they’re inside a theme park, I think they’re pretty good. Another tip is to definitely join the dining plan if you plan on eating within the parks. For the three of us, the meal plan came up to around $140+ a day. Our dinners, if we weren’t on the meal plan, would’ve been $90+ alone. It’s really a great deal!